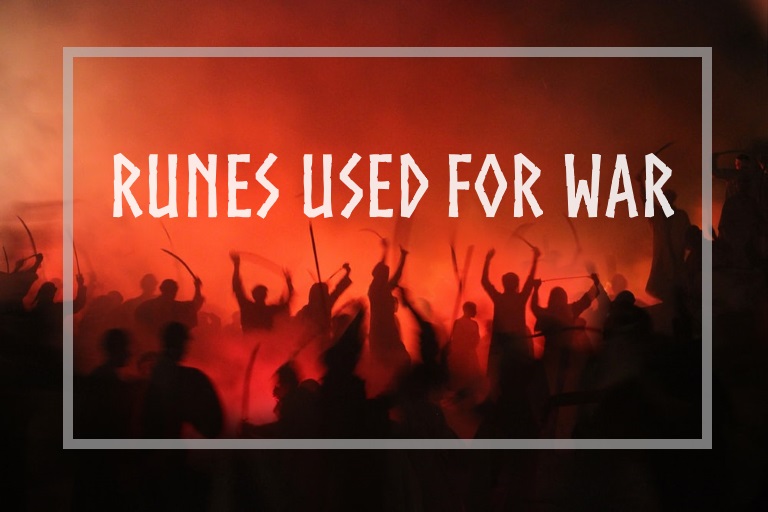 The runes were used for much more than foretelling the future. The symbols held the power of magical transformation and therefore men used them in battle against their enemies.

Odin composed a poem to brag about all the rune spells he knows and we picked our top 5 most useful runic battle spells that you would want to know in times of war. Sadly the exact wording of the runeverses remain Odin’s secret but let’s have a look anyway.

‘In the thick of battle,
If my need be great enough,
It will blunt the edges of enemy swords,
Their weapons will make no wounds.’

Personally I would much prefer fighting if I knew that the sword of my opponent weren’t sharp. Of course he can still knock me on the head with his shield, but it would greatly improve my odds. That’s why it’s our number 5.

‘It will free me quickly
If foes should bind me fast
With strong chains, a chant that makes
Fetters spring from the feet,
Bonds burst from the hands.’

While some people like being tied up, the threat of the kind of torture the Old Norse specialized in, would probably make most people dislike the idea of being a prisoner of war. So in case that anti-sharp sword chant didn’t work out and they got you pinned down, you can always escape with number 2, when nobody is looking. Very nifty.

‘No flying arrow,
Aimed to bring harm to men,
Flies too fast for my fingers to catch it
And hold it in mid-air.’

Do you want those super fast ninja reflexes when you escaped captivity, because sadly they discovered you, and now there are a dusin bow men showering you with their deadly love? Odin has got your back with number 3 on our list: catching arrows midair. That’s just showing off.

2. But what if you didn’t need any of the first three rune spells?

‘If I throw a cup of water over a warrior,
He shall not fall in the fiercest battle,
Nor sink beneath the sword’

Just a cup of water and a rune enchantment could stop that one way trip to Valhalla. I guess not dying is a pretty neat trick! I mean, no one says that you wont be maimed horribly or scarred for life, but you won’t die. Yay!

‘When I lead to battle old comrades in-arms,
I have only to chant it behind my shield,
And unwounded they go to war,
Unwounded they come from war,
Unscathed wherever they are’

Yeah, so runes are pretty potent when they are capable of saving not only your life but your pretty face as well. This has to be the number 1 war rune spell. I’m guessing there is a lot of millitary leaders who would love to know this spell, Odin.

With believe in magic like this, it’s no wonder that the vikings were so renowned for fearlessness in war.

Please consider subscribing to our newsletter. We promise we’ll only send you the big news like when we release a new game.

How to Cast Runes

The Magic of Runes Explained